Shaun Kingma, Director of Frankenstein, A New Musical talks to us about the up coming auditions. 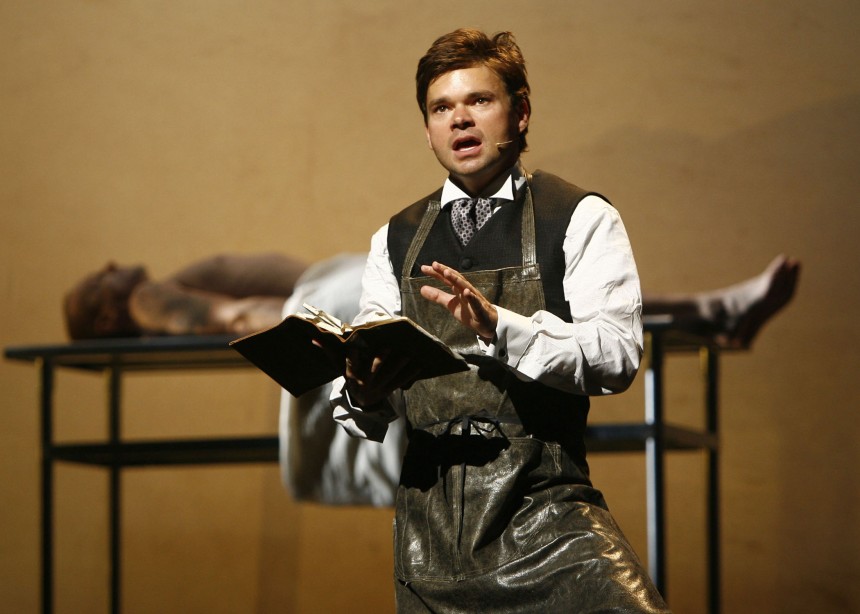 We are thrilled to present the Australian Premiere production of Frankenstein, A New Musical in November 2014.

We caught up with director, Shaun Kingma, to discuss the show and what the production team is looking for in the upcoming auditions.

Tyson and I were looking to work together again on a new project, having thoroughly enjoying working with WMTC in 2012 on Next to Normal. We, and the company, wanted to go somewhere a little more left of centre. Tyson and I share an affinity for horror films and have wanted to merge this into our stage work with a project that was dramatically and musically satisfying. Finding a good horror musical is not easy though – the pickings are slim, with only a small handful to choose from.

As luck would have it, I remembered a random recording I picked up somewhere for Frankenstein, A New Musical. Having another listen, I realised how much I enjoyed the originality of the show: the very clever use of storytelling and the unusual structure of the show.  It felt fresh, new and incredibly raw and human at the same time. It seemed to cut away the typical black and white film version we have all come to know and brought the story back to its roots. On top of this, the music certainly left a big impression (it hasn’t left my playlist for months now).

WMTC seemed the perfect choice for this show – a supportive company that provides an environment where creativity can flourish and that is willing to take a risk on an unknown production.

As we are now nearing the end of our pre-production phase, we can’t wait to explore this new show with our cast. It is an epic piece of theatre and I think we are all going to be in for one hell of a ride!

What are we looking for in a cast?

‘We are looking for a small cast of 15. This is very much an ensemble piece, with many roles doubling, including 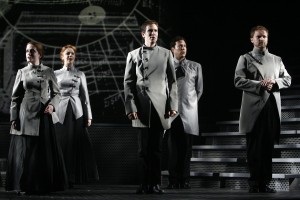 some of the principal roles. It will be a very busy show for all, so we are looking for people who enjoy the challenge of playing multiple roles and who want to flex their vocal and acting muscles.

As this is an almost completely new show (having only been performed off-Broadway and one or two other US locations) we are looking for people who want to share the experience of creating something new and different, not just a carbon copy of a Broadway production. There are no preconceived ideas for the show, no templates we have to follow. This is highly exciting for the production team and we hope our cast will help us in this journey.

Because of this, we also don’t have preconceived ideas of how each character should look. We are very open-minded at this stage for each role and what each performer may bring to it. That said, there are some specifics that would be required. (Please see audition listing for full cast breakdown.)

As the piece is almost entirely sung through, obviously vocals are important. But equally important is the ability to tell the story clearly through these songs and musical interludes.

The show itself is set in the late 1700’s, however this will not necessarily be a period piece. We will not be looking to stage a melodrama. We want to create a show that is fresh and modern, that has a rawness and a definite edge to it. The cast is integral to achieving this.

A little more about the show

The show follows the story of Frankenstein (remember Frankenstein is the creator, not the creature) and his Creation. The story initially leads you to believe it is all about revenge, but it soon reveals itself to have a much more powerful meaning. The show very cleverly uses some interesting storytelling devices which ensure that the audience members are always on the edge of their seats, not knowing where the story will lead next. This is quite an accomplishment, given how well we all know the story of Frankenstein. The music drives the narrative forward at every moment, with minimal stops for applause (which also allow the audience to take a well deserved breath as well).

We are extremely lucky to have the support of the composer and writer of the show, allowing us artistic freedom in the development of this staging. We are hoping to incorporate one or two extra songs from their original drafts and cannot wait to workshop these pieces. 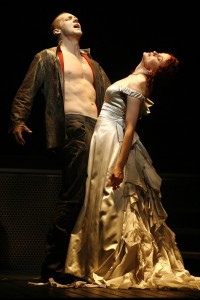 Steve Blanchard as the Creature and Christiane Noll as Elizabeth in the 2007 World Premiere Production in New York City.

Without telling us too much, how are you planning to stage the show?

There are definitely some things I will be keeping very tight lipped about. The set itself is most certainly a first for this company and it contains many, many surprises. I don’t want to give too much away, but I have been working on the design for the past six months and it has certainly been the most challenging concept to devise but, now that it is finished, the most satisfying.

As the show constantly moves from location to location and jumps back and forth in its time line, it requires a filmic approach; one of constant action. Though not necessarily a horror story (it has more to say about humanity than horror or science fiction), fans of horror films will certainly get a kick out of it as well.

It is not only the look of the show that will set its tone, but its soundscape. This is almost a character in itself and I hope this will add yet another layer to a very different, but thrilling, evening.

What can you expect at auditions?

We want you to do your best – we are on your side.  Remember that all of us on the production team are also performers who know exactly what it’s like standing there. We are rooting for you!

All we ask is for you to do your best. Try to choose songs that show you off in the best possible way and are suitable for the show (a tiny bit of research beforehand pays off in a big way….).

We are not asking for monologues (we can hear the collective sigh of relief), just a sing and a chat and possibly a small read.

Those notified of any callbacks (if required) will also have plenty of time and information to prepare.

Last but not least, we wish all our auditionees the best of luck! We hope that you enjoy your audition experience and look forward to seeing you in July.”

Auditions for Frankenstein, A New Musical will be taking place from Sunday 20th July.
Click here for further information and a breakdown of audition requirements.