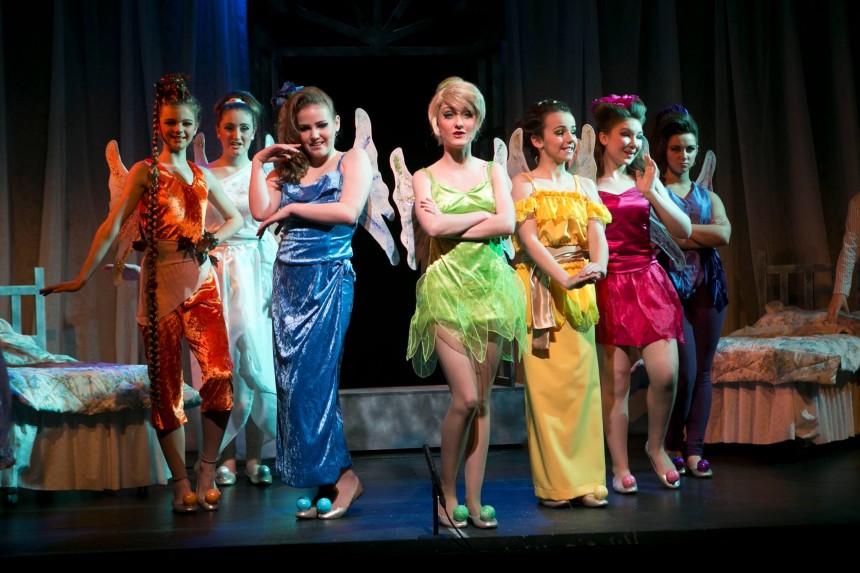 It’s fairly safe to say that rarely is there a child that has not been brought up hearing of the wonders of the adventures of Peter Pan in Neverland. That timeless story of the Boy that never grew up has been told to generations, even becoming a dream of sorts for children and adults alike; never grow up. For the cast and crew of Williamstown Musical Theatre Company’s Junior program, now in its fourth year, those dreams have become a reality with their upcoming production of Disney’s Peter Pan, Jr.

Last week I was fortunate to be able to have to opportunity to meet with Director Stuart Dodge, and Peter Pan himself, fourteen year old Campbell Bonello to have a chat.
Walking through backstage at the Williamstown Mechanics Institute Theatre, there was already a sense of magic in the air. It was the end of their final rehearsal before the madness of tech week, and the buzz of near-opening night was certainly in the air. There were fairies flying about, weaving between backstage and the dressing rooms, ready for the next scene while a beautiful harmonies of young voices singing ‘You Can Fly’. It was very clear from the 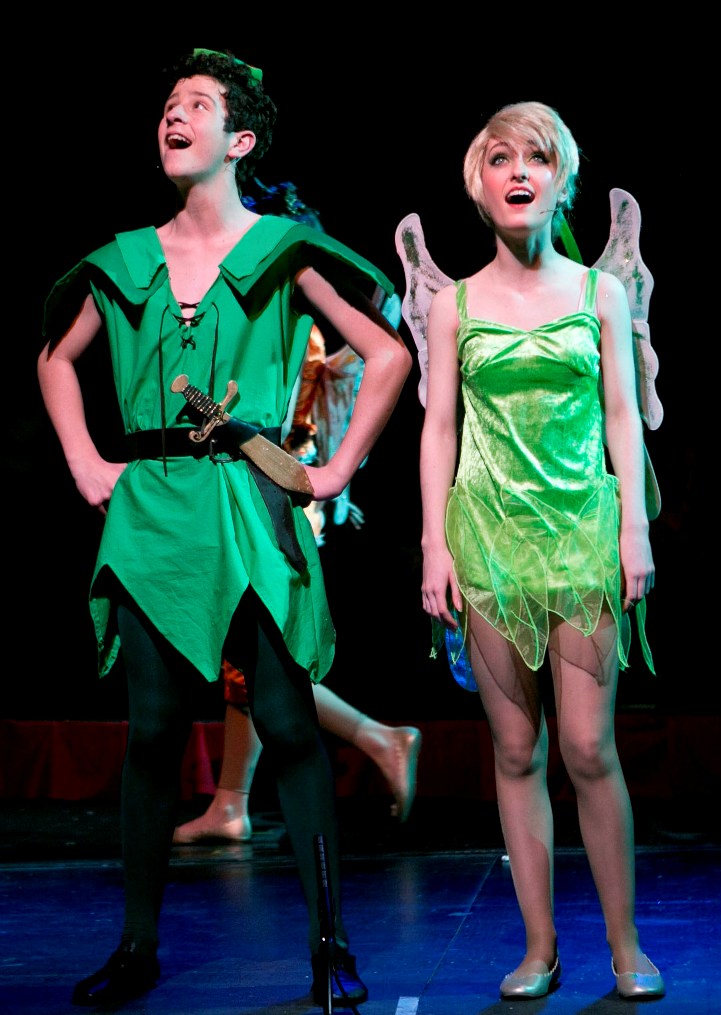 beginning that this was a group that was madly in love with what they had created.

While waiting for a few last minute things to tidy up, I was lucky to be given a behind the scenes tour of the stage and set by Campbell (how many people can say that they were shown around Neverland by Peter Pan?). With a smile on my face, it truly felt as though I had stepped into Neverland, and was left completely in awe by the magnificent sets that truthfully have to be seen to be believed.
Being youth theatre, there was always going to be differences when it came to talking with cast and crew about the pressures facing them during last minute rehearsal and production week. When speaking to most adults, a common theme is the late nights and the harsh hours that go into making sure the production was ready for opening night. Upon asking both Stuart and Campbell how everything was going, I received a resounding ‘AMAZING’. It was nothing but smiles and praise for every aspect of the final rehearsal process.

My first question was regarding the choice of the performance.
“Disney shows are always popular, and really well known. This has are some amazing themes in it as well, courage, respect, trust and the importance of family.” Stuart said. “We looked for a kids show that will obviously appeal to both cast and audiences, and Peter Pan is one of the most loved movies of all time.”

Stuart is certainly no stranger to theatre, having been involved with theatre for seventeen years now, both onstage and off playing such roles as The Wedding Singer’s Glen Gulia, Chicago’s Amos Hart and Daddy Brubeck in Sweet Charity. In 2010, he and fellow director Ang Cuy (who returns to WMTC as Musical Director for Peter Pan), were approached to start the junior program at Williamstown. The program has since put on performances of Disney’s Beauty and the Beast, High School Musical, Annie, and now Peter Pan.

But while his history with WMTC and its junior program is rich, so is his partnership with the boy who never grew up, Campbell Bonello. At age seven, Campbell made his musical theatre debut thanks to the insistence of his sister, when he starred as Abu in a production of Aladdin where Stuart was involved. 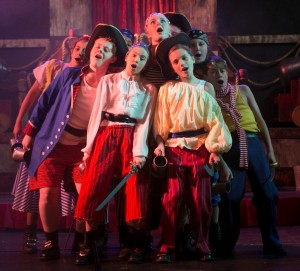 “He was tiny and cute, and came up to about my stomach…now he’s taller than me. It’s awful.” Stuart lamented, causing a laugh from Campbell. Just watching the interaction between these two proves the kinds of friendships that can be built through theatre. Though young in age, and set to play the boy who never grew up, Campbell does go against Peter’s character and is very wise beyond his years.
“He’s really taught heaps of us that he doesn’t like the words ‘that’s a good show for kids’. Cause although it’s a kids show, he still expects us to be like adults and that we still can be professional and that’s something I want people to get out of it.”

As well as the friendship these two share, they also share a love for Youth Theatre and the opportunities that it offers the performers of the future.
“If I look at how far this one (Campbell) has come, it’s pretty huge.” Stuart explained. “Kids are really appreciative of everything you give them, they work hard. You get amazing development out of the kids, and they’re just so excited and they build amazing friendships and you just see how much they get out of it…that’s why I love it.”

I asked Campbell what it was like to be able to play such an iconic and beloved character. He grinned brightly, with the same animation and mischievous delight that any Peter Pan should have.
“It’s such a fun role to play, it’s so different to any role I’ve played before. But I like playing it because so many people look up to him. And he’s the boy who never grew up, and that’s what I want to be.”

This production of Peter Pan shows the beloved Disney movie, with all the characters and music that people know and love, but with a few little twists and a few new faces. 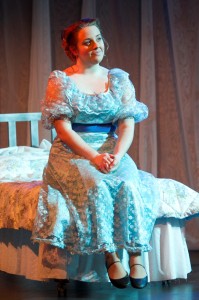 The cast of thirty kids, aged from seven to seventeen is a broad and extensive group with a variety of experience, from new first time members, to old pros; with three cast members being veterans of all four of WMTC Junior Program’s shows; Peter Pan, Wendy Darling, and Tinkerbell.
“We’ve got three kids who have been in all four shows with us since we started here.  We can see that they’ve had those friendships, but this cast haven’t been excluding anyone. You’ve got these people who have been friends for four or five years and lots of new people, with a lot of first timers to the cast, and you wouldn’t know.” Stuart said.
“I love the cast. And it’s good forming relationships with the cast and being really good friends and close to the cast, and that’s something I love about theatre; the relationships you form.” Campbell grinned.
Stuart agreed wholeheartedly. “It’s such an all-embracing group, they’ve been fantastic. No little cliques that you get. With these guys, it’s all in.”

I asked Campbell what he hoped the audience would get out of the performance.
“I think they should come and see the show, cause it’s a good show. I mean, the costumes are amazing the sets, lighting…just everything’s amazing.”

The Junior Program is a completely community based volunteer organisation, and it has astounded both cast and crew at how generous the community has been with their productions, particularly Stuart.
“It’s incredible the amount of work that people are willing to put in, and I feel that people go that little bit extra for the kids shows, because they can see just how much these guys get out of it, and how important it is to them and their lives. You know, it’s Glee essentially here, it’s true. You know, you might be an outcast, the daggy theatre kids, but here their talent and their personality are celebrated at every rehearsal.”
Once again, Campbell smiled and nodded his head, summing up this whole experience perfectly in a few simple words:
“I’m very lucky.”
Just before wrapping up the interview, I did have one request…to hear Peter Pan’s mighty crow. Campbell, though slightly rosy cheeked, held his hands on his hips in that proud Pan stance and crowed. But to hear it, you’ll have to see the show! 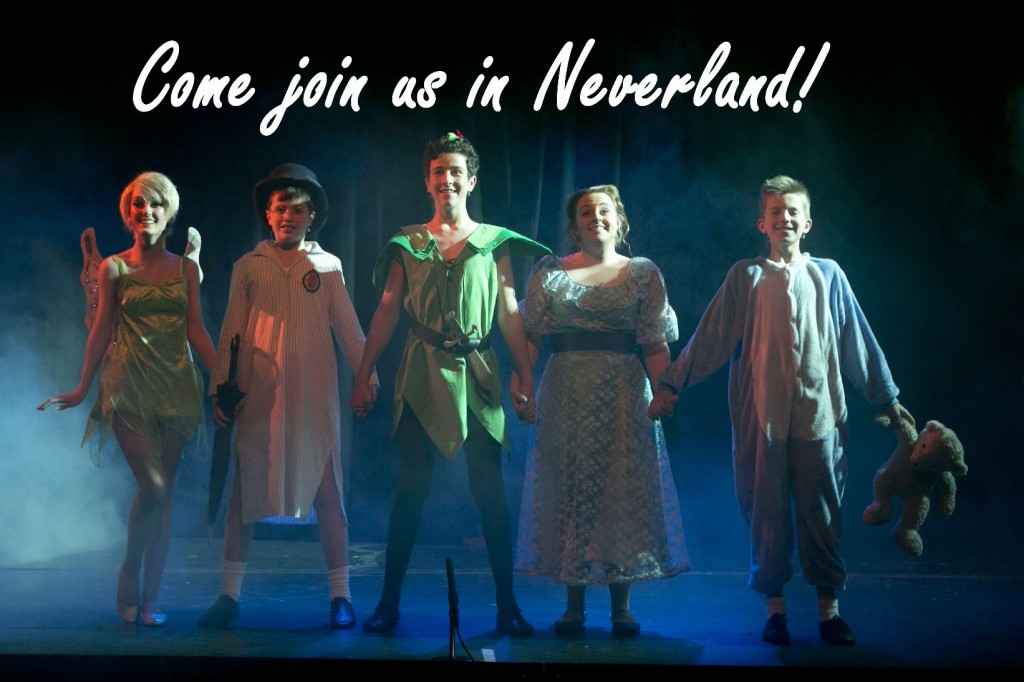 One thing that I have gathered by just half an hour with this company, is that it it’s a group of people doing what they love. It is so incredibly crystal clear that each individual member of the cast and crew adore every moment of putting on what is sure to be an incredible performance, using a whole lot of faith, trust…and yeah, perhaps a little pixie dust.
Truly, there is only one way to even begin to experience the magic yourself, and that is to come down to the Williamstown Mechanics Institute Theatre and see this incredible show.