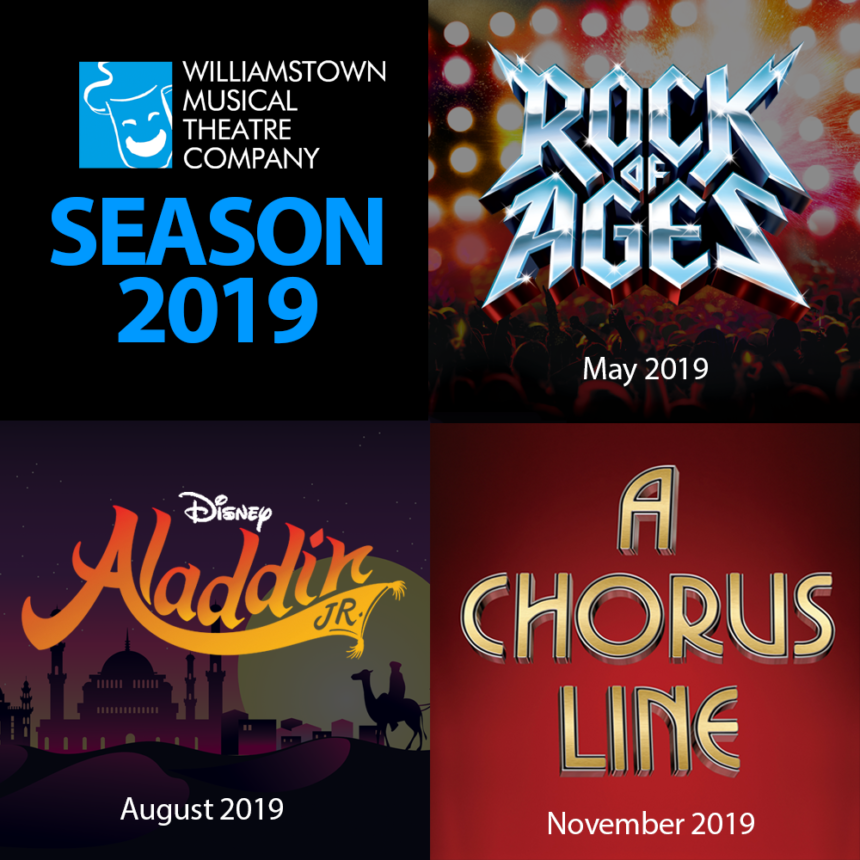 We are very excited to announce our 2019 performance season and the release of Season Subscriptions.

Rock of Ages takes you back to the times of big bands with big egos playing big guitar solos and sporting even bigger hair!

It’s the tail end of the big, bad 1980s in Hollywood, and the party has been raging hard. Aqua Net, Lycra, lace and liquor flow freely at one of the Sunset Strips last legendary venues, a place where sex machine Stacee Jaxx takes the stage and scantily clad groupies line up to turn their fantasies into reality.

Amidst the madness, aspiring rock star Drew longs to take the stage as the next big thing (and longs for small-town girl Sherri, fresh off the bus from Kansas with stars in her eyes). But the rock and roll fairy-tale is about to end when German developers sweep into town with plans to turn the fabled Strip into just another capitalist strip mall.

Can Drew, Sherri and the gang save the strip – and themselves – before it’s too late?

Nominated for five Tony Awards, including Best Musical, ROCK OF AGES features the music of hit bands such as Styx, Poison, Twisted Sister, and Whitesnake among many others. Know What Love Is, Feel the Noise, and Take Your Best Shot captures the iconic era, visiting the larger than life characters and exhilarating story that has turned ROCK OF AGES into a global phenomenon.

This is one for the ages that will have you singing “Here I Go Again.”

Based on the 1992 Academy-Award – winning film and the 2014 hit Broadway show about the “diamond in the rough” street rat who learns that his true worth lies deep within.

Imagine if you had three wishes, three hopes, three dreams and they could all come true. Disney’s Aladdin Junior is filled with magic and adventure, following the stories of Princess Jasmine, Aladdin and Genie. Including songs “Friend Like Me,” “Prince Ali” and “A Whole New World”.

Aladdin and his three friends, Babkak, Omar, and Kassim, are down on their luck until Aladdin discovers a magic lamp and the Genie who has the power to grant three wishes. Wanting to earn the respect of the Princess Jasmine, Aladdin embarks on an adventure that will test his will and his moral character.

There’s only One Singular Sensation – a powerful testament to the human spirit.

One of the best known and loved dance shows of the modern era, A Chorus Line broke new ground with its raw honesty about the dancer’s life. It scooped the pool of Tony Awards in 1976, including Best Show, Best Score, Best Book and Best Choreography, and is the sixth-longest running show on Broadway.

Casting for a new Broadway musical is almost complete, and for the dancers, this audition is the chance of a lifetime and what they’ve worked their whole lives for.

A CHORUS LINE brilliantly evokes both the glamour and grind of showbiz, and is the musical for everyone who’s ever had a dream and put it all on the line. The iconic score features such classics as “What I Did for Love,” “One,” “I Hope I Get It” and more!

With its celebration and true-to-life depiction of performers and their struggle to achieve greatness on the Broadway stage, A CHORUS LINE has earned unanimous praise as one of the true masterpieces of live theatre with its brilliantly complex fusion of dance, song and compellingly authentic drama.