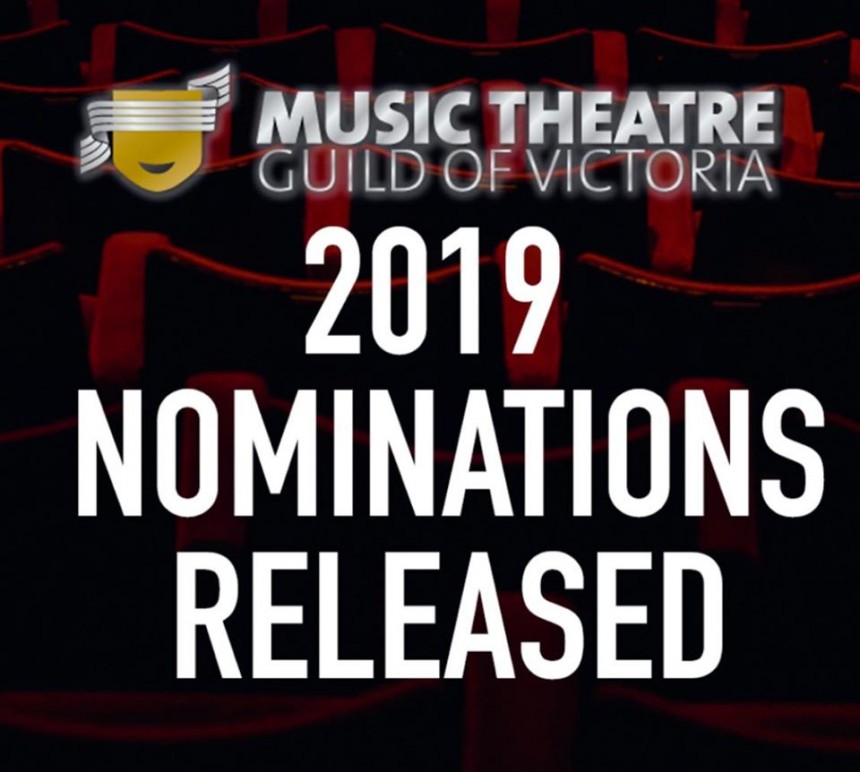 The 2019 Music Theatre Guild Nominations have now been released, and what an amazing year it has been with the following 18 nominations. We would like to take this opportunity to congratulate the below nominees but also congratulate ALL of you who have been a part of our amazing year.

The Judging year for 2019 concluded on the 31st October. Our most recent production of ‘A Chorus Line’ will be included in 2020 Judging year.

Production of the Year
– Side Show
– Rock of Ages

Male Performer in a Supporting Role
– Will Hanley as Buddy, Side Show

Recipients will be announced at the 2019 Guild Awards Ceremony held on Saturday 14th December in Ballarat.

We trust everyone is staying safe and looking after themselves during this current lockdown.

As you are aware, Mamma Mia! had been postponed from 2020 and rescheduled to new performance dates this coming November 2021. However, based on the Delta outbreak, as well as the impact of the current Lockdown on pre-production efforts, the WMTC committee of management has made the heartbreaking decision to postpone once again until next year.

The company is optimistic of being able to stage Mamma Mia! in 2022. We have a committed production team, cast and crew who are keen to share this wonderful production with all of you. This of course, will be subject to advice from the Australian Government and relevant health organisations regarding COVID-19.

We would like to thank all our wonderful patrons for your loyalty, patience and understanding during this difficult time, as well as for your continued support.

Please keep a look out for updates and new dates which will be announced ASAP.

The WMTC family looks forward to seeing you all once again in our foyer.

It is with heartfelt sadness that we inform you of the passing of our beloved friend and WMTC family member, Norm Cassidy-Anderson, after a courageous short battle with cancer.

Norm’s involvement with WMTC initially started in 2005, as both Father and big supporter of his son and our President, Marcus. Becoming actively involved through his assistance with set building, where he used the knowledge he gained through his previous trade of carpentry, he eventually took on the role of ‘Head of Construction and Workshop Coordinator’ from 2010 to 2017, and was in this role for a total of 21 of our productions.

In his early years, Norm studied art at school and was involved in a band, which performed across Melbourne, playing the rhythm guitar and vocals. He was also a roadie for professional bands and in his spare time enjoyed sculpting.

Norm enjoyed the creative aspect, as well as the challenges of working in the theatre environment. His set design / scenic art credits include WMTC’s productions of Red Hot and COLE (2013), a set he was most fond of due to his love of the Art Deco Era, the set for the Australian Premier of Catch Me If You Can (2016) and Urinetown (2012) for which he was nominated for Best Settings by the Music Theatre Guild of Victoria.

In addition, Norm contributed his wide range of skills to many other of our productions through both scenic art and the making of specialty props (with at times, much patience and humour). In recent years, he continued to assist and provide advice, as well as organise materials for the construction of WMTC sets. For the Men’s Shed, based at the Hobsons Bay Community Workshop in Altona, he also ran woodwork and other classes for general users as well as those with disabilities, which brought him much joy.

Norm will be terribly missed by all at WMTC. We thank him for his mentorship of our theatre community for all things set orientated but also and most importantly, for his great friendship, kindness and never ending sense of humour.

Our deeply felt condolences, thoughts, and love to Norm’s family and friends.

It is with great sadness that we inform you of the passing of our beloved friend and collaborator, Anna Marinelli, after a courageous fight against a long term illness.

Anna, known as ‘Mamma Marra’ or ‘Marra’ to all of us who looked up to her, was a major contributor to WMTC over the years, beginning with her involvement in the inception of the renewed and re-branded WMTC in 2006. She acted as Secretary of the company from 2007 to 2009, returned as a committee member in 2014 and assisted both with our costume department as well as our junior productions in various roles. In addition, she came up with the name for our inaugural Cabaret Festival in 2007 “Mechelec” being a combination of the words Mechanics and Electra Street. Apart from this, Anna was a much loved mentor and friend to all that passed through our doors, whether a performer, volunteer or management member. Her enthusiasm and love of theatre was infectious and no more apparent than when she was directly involved in a theatre production, ten of which were with WMTC as follows:

Anna will be incredibly missed by the WMTC family and we thank her with endless love for everything that she has imparted to all of us, as well as to Melbourne’s theatre community.

Our heartfelt condolences, thoughts, and love to Marra’s family and friends.

*** AUDITIONS ***
We are excited to announce further auditions for our rescheduled performance season of MAMMA MIA! to complete our cast. The production will be performed over a four week season at the Centenary Theatre from 5 to 27 November, 2021.

Auditions will be taking place on Sunday 11 July 2021.

Further information including audition requirements can be at the following link – https://wmtc.org.au/mamma-mia-auditions-2021/

After what feels like a lifetime of theatre and the arts being on pause due to COVID, here is the news we know you have all been waiting for!

Williamstown Musical Theatre Company is THRILLED to join some of our neighbouring companies and comrades by reopening and returning to tread the boards in November 2021, with our postponed production of Mamma Mia! – Direction by Stuart Dodge, Musical Direction by William Conway and Choreography by Dylan Henry.

With the hard work and investment of energy that our cast put in before lockdown, we are soon to commence rehearsals, IN PERSON, to bring you 12 jaw-droppingly spectacular performances of Mamma Mia! at the Centenary Theatre from the 5 to 27 November 2021.

Patrons who had purchased tickets to this production in 2020 will be contacted for advanced bookings, prior to them going on sale to the general public from Friday 6 August.

Over 60 million people worldwide have fallen in love with the characters, the story and music that make Mamma Mia! the ultimate feel-good show and now YOU CAN TOO!!

We will be on the hunt to complete our cast, so stay tuned for audition information to be released soon.

#sentimentalsunday to our 2018 production of 'SIDE SHOW' based on the true story of Siamese twins Violet and Daisy Hilton who became stars during the Depression, the production was a moving portrait of two women joined at the hip whose extraordinary bondage brings them fame but denies them love. The very thing that made them different… made them extraordinary.

#sentimentalsaturday to our 2018 production of 'ELF JR' and our first junior production performed at the Centenary Theatre.
Buddy, a young orphan, mistakenly crawled into Santa’s bag of gifts and is transported to the North Pole.

Approximately one year ago, restrictions were beginning to be enforced upon us to protect us from COVID-19. Over the last 12 months we’ve all lost ourselves along the way… A little or a lot. But it’s important to remember that when you lose yourself, who knows what you might find. Let’s all choose to use the next 12 months to begin on the path of rediscovery into ourselves.

#sentimentalsaturday to our 2018 production of 'HOT MIKADO' and our first production performed at the Centenary Theatre.
The production was a hilarious and ‘HOT’ updating of Gilbert and Sullivan’s ‘The Mikado’, and weaved a sharp witted, fun-filled tale where despite life or death stakes, characters still found time to croon their troubles away.

It’s the first day of Autumn and we don't know about you but it's almost as if we blinked and summer just passed us by! So, like Olaf from Frozen, we'll just continue to imagine what it will be like when summer does come.

#sentimentalsaturday to our 2017 production of 'RENT – THE MUSICAL'. Set in the East Village of New York City, RENT is about falling in love, finding your voice and living for today. Winner of the Tony Award for Best Musical and the Pulitzer Prize for Drama, RENT has become a pop cultural phenomenon with songs that rock and a story that resonates with audiences of all ages.

After the last week of some gloriously warm and sunny days, the cold winds have returned. However, we hope that whilst the weather was warm and the sun was shining, that you remembered to let that sunshine in, enabling you to get through these darker days.

#ThrowbackThursday to our 2016 production of 'City of Angels', a wickedly funny celebration of the 1940’s film noir genre and dark detective fiction which takes place in two worlds.

The ambitious writer of a Hollywood screenplay, Stine, struggles as he negotiates his demanding film studio boss, compromises on his movie and dealing with the women in his life, while his creation, ‘private eye’ Stone takes on a life of his own and mysteriously gatecrashes Stine’s life.

While screenwriter Stine’s detective story plays out in black and white in the ‘reel world’, he finds the dangerous temptations of ‘real world’ Los Angeles almost too colourful and endlessly alluring.

In the midst of our lockdown, albeit short, it’s important to remember that although it may take some time, effort and collaboration, if we all work together as a community to do the right thing, all knots, physical and metaphorical, can be untied.